Home VPN Reviews ProtonVPN Review 2022: A Good Choice, But Is It Fast Enough? 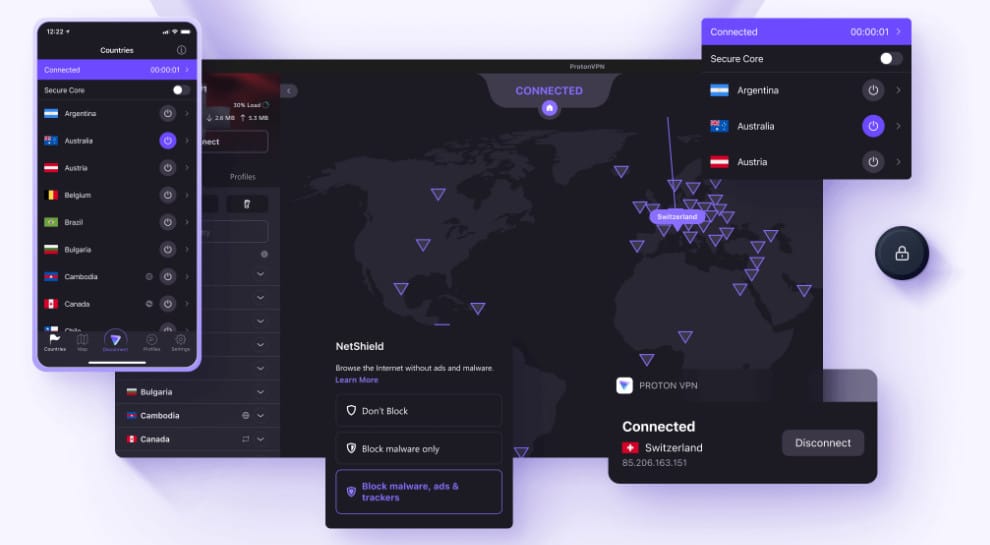 ProtonVPN Review 2022: A Good Choice, But Is It Fast Enough?

Even though it is not the oldest Virtual Private Network (VPN) out there, ProtonVPN lives up to some level of competition with the oldies. The company, Proton was founded in the year 2014, and since then, it has been growing without slack.

Some users might perceive ProtonVPN as a VPN specifically for privacy enhancement because of its base (Geneva, Switzerland). This VPN truly offers amazing privacy and security features, but it doesn’t end there. It is great for streaming and torrenting and the pricing isn’t on the very high side. In this article, I’ll review ProtonVPN’s features and thus make it easier for you to make a decision about it.

ProtonVPN is a Swiss-based VPN with 6 years of active service delivery. On an average ratio, the VPN has 20 servers to one country, which gives you a reasonable amount of options to select from. The servers are fast and reliable for excellent streaming and torrenting services with a capacity of 1,264 Gigabits per second (Gbps).

This VPN service has some security features in a bid to ensure your security. The features include military-grade encryption, secure VPN protocols, a kill switch, and a strict no-log policy. They also put physical measures in place to raise your security and privacy standard. The privacy laws of Switzerland technically back up all those features.

ProtonVPN has three paid subscription plans and a free version, yet you get unlimited bandwidth of data on all plans. It has software packages for Android, Linux, macOS, Microsoft Windows, and iOS on which you can connect multiple devices to each subscription.

ProtonVPN has a decently stuffed server database with 1,080 servers in 54 countries. Below is a breakdown of their coverage in different areas.

With ProtonVPN’s level of diversity and region density on network reach, you have several options to connect to almost every region of the world. The VPN also has servers dedicated for torrenting and P2P file sharing.

Speed and stability are two of the determining factors in the rating of a VPN, especially for users that are in for high-end activities like online gaming, video streaming, and torrenting. The performance of the servers is equally important because if the server connection drops very often, the user will lose connection with the VPN, and the data in the transmission is left vulnerable to attacks.

Another highlight is the rate of connection for downloads and uploads. Several factors influence your connection rate, and they include the Internet Service Provider (ISP) bandwidth limit, ISP throttling, the security protocol in use, and the device’s processing power.

Those factors put a restriction on how much data you can download or upload with a given period of time. That is the reason why you might experience skips when you stream videos. However, ProtonVPN helps you overcome all those challenges.

ProtonVPN has a “Quick Connect” feature that can automatically connect you to the fastest server available at a single click. This VPN service also measures your speed and displays it at the top-right corner of the dashboard. Overall, ProtonVPN servers are of high speed, so if you experience any speed lag, consider the following options:

As you’d expect of a top-tier VPN provider, ProtonVPN has an earnest approach towards security. It has robust security details put in place to keep your traffic “untouchable” by hackers. To start with, it has a “Secure Core” technology that routes online traffic via multiple servers in a bid to defend you against network-based attacks.

Furthermore, it uses the most robust encryption detail to protect your traffic data during transmission — Advanced Encryption Standard (AES)-256. That level of encryption is the same used by the military and other government institutions; it is tagged “military-grade encryption.”

You don’t have to worry about your data integrity if the encryption key gets hacked in the future. ProtonVPN’s Perfect Forward Secrecy policy ensures that your traffic is encrypted for life. Another standout point is that the VPN uses ONLY IKEv2/IPSec and OpenVPN (the protocols that have been known to be secure). Even though other protocols are less costly to operate, ProtonVPN doesn’t use them.

Finally, the VPN service has a kill switch and an Always-On feature that blocks your traffic and restores your connection, respectively, if you lose connection with the server. ProtonVPN also has DNS Leak Protection. The leak protection acts by securing your DNS queries through an encrypted tunnel for the uninterrupted transmission of traffic.

With the level of anonymity this VPN delivers, I could say the “P” in ProtonVPN stands for Privacy. The first privacy effort is the situation of its headquarters in Switzerland. Based on that, the company operates strictly by the modalities of Swiss laws. The good news here is that Switzerland has one of the best privacy laws across the globe in the sense that it basically doesn’t put ProtonVPN under any obligation to save your connection logs.

Concerning the strict Swiss laws, ProtonVPN cannot be forced to perform targeted data logging on identified users. Your browsing history remains private. Also, connection to the VPN service masks your device’s IP address. Since that is your identity online, it masks your already encrypted traffic. When you connect to a ProtonVPN server, there are hundreds to thousands of other users connected, so the traffic from that IP address will be emanating from various sources, making it impossible for cyber snoops to single you out.

ProtonVPN has software apps for the leading operating system platforms — Windows, Mac, Linux, Android, and iPhone. The VPN provider also has a software package for Routers. Regardless of what device you use ProtonVPN on, you’ll get the standard top-tier services. Different sorts of reviews have also put the VPN in their good books concerning that factor.

Moving on, the VPN software has an easy-to-use interface. You can get everything done by simple click navigations.

Streaming platforms like Netflix, Amazon Prime Video, YouTube, Deezer, and Hulu usually purchase the license to air their programs in selected regions. The streaming platform scans your IP address to determine your location and locks you out if the content isn’t available to your location.

Rakuten TV, for instance, is restricted to Japan, so only users in that region will have free access to the content on the streaming site.

ProtonVPN exhibits a fantastic prowess in bypassing the geo-restriction on video and audio content. It masks your IP address effectively, disguising it to the scan of the streaming platform. The VPN does the magic regardless of your present location. However, to enjoy the exclusive streaming fantasy, you have to connect to a ProtonVPN streaming-enabled server. The streaming-enabled servers are reserved for only their Plus and Visionary subscribers, so look out for that and don’t just go for the Basic subscription if you’re looking to stream content.

Regarding peer-to-peer file transfer, ProtonVPN offers a safe haven. Even if you’re torrenting via public Wi-Fi, you can be sure to have a secure connection. Despite the VPN’s privacy and security features, it comes with several other perks that are put in place so that you’d have the best of the best. For streaming and torrenting, ProtonVPN delivers top-notch service in unlimited bandwidth of data with a zero-buffer connection. You won’t even have to worry about a lag in connection.

No matter how great a VPN is, if the potential users can’t afford it, it’ll be just another VPN. In this case, ProtonVPN is a fantastic provider. It offers range, depth, and detail in its subscription plans. There is a plan for every budget.

This VPN service has four subscription plans, namely Free, Basic, Plus, and Visionary plans. Regardless of the plan you choose, you can pay in either Euro (EUR), US Dollars (USD), or Swiss Franc (CHF). As you’d expect, the various subscription plans have differences in their deliverables. They are as follows:

Regardless of your subscription plan, you get a strict no-log policy offer and the services of an ad-blocker. Also, ProtonVPN offers a 30-day money-back guarantee on all paid plans.

The VPN company is quite clear on the level of services they offer. The information they provide on their website matches the experience of their customers, so there has been no room for criticism per se.

Overall, the user feedback for ProtonVPN has been another significant factor in its categorization as one of the top dogs.

Does ProtonVPN Work in China?

China stands tall as a checkpoint region of the world to VPN providers for a good number of reasons. In this case, we’ll consider it from two angles — for China and in China.

ProtonVPN does not have any servers in China. To that effect, you can’t use the VPN to access content restricted to China. So it is not considered a good VPN for China. The Chinese government works hard to make sure they keep tabs on the online activities of the people. Despite that, they won’t allow Chinese access sites abroad. Cyber freedom is in shambles in China, but that doesn’t take anything away from ProtonVPN; it remains one of the best.

The good news is, ProtonVPN claims they’re working on countermeasures to circumvent the government’s censorship.

1. Top-tier security mechanisms: The combination of military-grade encryption and entirely secure protocols just makes it impossible for you to go wrong on security with ProtonVPN.

2. Strict no-log policy: The VPN company claims that they do not keep data logs and timestamps of their customers’ online activities.

4. Wide range of server coverage: Global reach is another strength because it has servers in all seven continents.

5. Adequate customer support: Unlike some other premium VPNs that deliver swift responses to user complaints through live chats and chatbots, ProtonVPN resorts to emails strictly. Even though it’s more stressful, the high-side is that they’ll attend to you as soon as you get done with the formality.

6. Decent unblocking ability: The Plus and Visionary plans of this VPN service can conveniently unblock geo-restricted content on platforms like Netflix, Prime Video, CrunchyRoll, and YouTube.

7. Good torrenting service: Torrenting is even available on the Basic subscription plan. While you torrent with ProtonVPN, the only thing you have to worry about is what to download.

8. Ease of installation and use: The setup procedure is straightforward. A VPN newbie won’t have trouble navigating through the VPN interface.

1. Inability to access China: ProtonVPN is so close to perfection, but its inability to bypass the “Great Firewall of China” makes a red flag for some users.

2. Averagely fast servers: Not slow, but definitely not the fastest in the business. It’ll be fair to say the servers are a good curve above average; still good enough.

There’s no doubt, ProtonVPN is one of the elites. Even though the China flaw has some weight, you can’t ignore the height of privacy and security detail invested in this VPN service. It ticks almost all the boxes and is consistent with growing its already-made good name in the VPN market today. I would recommend ProtonVPN as a strong choice.