Home Guide Setup and use SurfShark on PS4 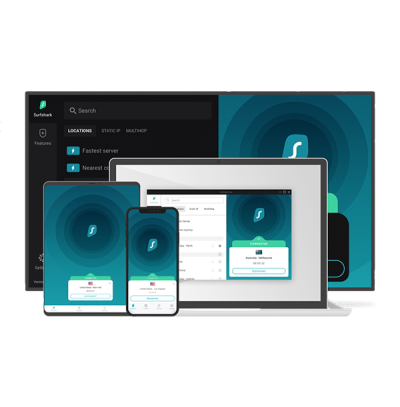 Visit Surfshark Save up to 84%

Setup and use SurfShark on PS4

Sony’s PS4 is a top-tier gaming system. The PlayStation 4 (PS4), released in 2013, is the successor to the PlayStation 3 (PS3) and has dominated the gaming industry since its release. In addition, it has spawned several enhanced models, such as a more compact system (PS4 Slim) and a powerful console (PS4 Pro) with 4K graphics.

Several online games are designed such that only residents of particular countries can play them. The absence of internet security also makes players easy targets for Distributed Denial of Service (DDoS) assaults and viruses. When combined with longer lag times, their gaming experience is severely diminished.

Additionally, PlayStations are more than just a game platform. They can function as a home entertainment system. However, users often encounter geo-restrictions on Netflix, Hulu, and other streaming services, making it impossible to watch their preferred shows or movies.

Connecting your PS4 to your SurfShark account gives you access to games and media content from anywhere globally. Also, it keeps you safe from internet security threats.

Despite SurfShark’s compatibility with the PS4, you cannot install it directly on your console because gaming consoles do not support VPNs.

Therefore, to use SurfShark with a PlayStation 4, you’ll need to set it up on a router or share a virtual Wi-Fi connection from a computer. Alternatively, you can connect the console directly to a VPN service through an Ethernet cable.

In this article, we will walk you through how to use SurfShark VPN on PS4.

How To Use SurfShark On PS4

You can use one of three techniques to do a SurfShark PS4 setup.

Set Up the PS4 SurfShark via Wi-Fi Router

To set up SurfShark on your router, follow these steps:

1. Set up SurfShark on your router

You need a router running OpenVPN or L2TP-compatible firmware if you want to use a VPN on it. So, you can upgrade to a router that supports VPN connections or replace your current router.

Afterward, open the router’s configuration panel. To get to the panel, input your router’s IP address in your web browser, where you normally type in a URL.

Look for a tab labeled “VPN client.” The router’s advanced settings are usually where you’ll go for this. This section’s location might vary by router model and manufacturer. To find it, click around.

Follow these steps below to get your router’s IP address:

You can also follow SurfShark guidelines for various routers. You will find this on its official website.

However, the best option for you will be to get a pre-configured router if you’re not cut out for manual setups.

These steps will help you:

Setting Up SurfShark Via Virtual Wi-Fi Hotspot for PS4

Alternatively, you can use a Windows computer to link your PS4 to a virtual hotspot.

Here are the first few simple steps for setting up a hotspot connection for SurfShark using a Windows PC:

Now, tap the dropdown menu to select the name of the hotspot connection you previously activated.

You can connect your PS4 to a VPN using an Ethernet cable and get SurfShark running on your computer. So, get a PC with an Ethernet port connected to Wi-Fi and follow the guidelines below:

There are several benefits to using SurfShark with your PS4.

The winner or loser of a game can be decided by milliseconds. And the distance to the VPN server affects the speed of any VPN connection. With more than 3,200 servers spread over 95 different nations, SurfShark can connect to servers near your current location, ensuring fast speeds. Furthermore, SurfShark provides quick and secure VPN protocols like Wireguard.

When you link up with a SurfShark server, it encrypts your data to the highest possible standard. SurfShark employs the same secure encryption used by the military and government organizations like the NSA to safeguard sensitive data. This feature is called the Advanced Encryption Standard with a 256-bit key.

Since there are a trillion permutations with AES-256, it has proven hard to break. As a result, SurfShark protects you from unscrupulous third parties, including hackers, ISPs, and governmental organizations.

As stated earlier, only a country’s residents can access some games. Also, some countries enjoy early access to some games. PlayStation games often have regionally specific release dates.

Before they are released in Europe or the USA. Many major releases first appear in Japan and Australia. But you can connect to a server in these countries from anywhere and play games from that area if you use SurfShark. SurfShark helps you bypass geo-restrictions and give you unlimited access to any game.

Additionally, PS4 has browsers and media players. Thus, you can access media content on your PS4 even if it is unavailable in your location. You can easily watch Netflix, Amazon Prime Video, Hulu, and other services on your game console from anywhere with SurfShark.

DDoS attacks are the primary cause of concern for all gamers. Hence, a gamer wants to avoid DDoS attacks at any cost. They hinder enjoyable gaming sessions by causing sluggish performance and outright crashes. Therefore, you need SurfShark’s DDoS protection to avoid these types of assaults.

Does SurfShark Work on PS4?

SurfShark is accessible to PS4 users. However, it cannot be installed directly on the device since gaming consoles do not allow VPNs. If you want to use the SurfShark with a PS4, you will have the option of setting it up on a router, sharing a virtual connection with your PC, or connecting your PS4 to a VPN server via an Ethernet cable.

Is SurfShark a good VPN?

SurfShark provides an amazing service to VPN users. It is a great choice if you are searching for a quick, dependable, and secure VPN for streaming, torrenting, and maintaining your privacy.

Does SurfShark Work in China?

SurfShark VPN is among the best VPNs you can use in China because of its Shadowsocks function. Government agencies and ISPs will have difficulty identifying you thanks to the encrypted proxy, which masks your data. It is also the best way to get through the Great Firewall.

Can I unblock streaming platforms with SurfShark on PS4?

Yes, you can. You’ll need SurfShark’s Smart DNS if you want to unblock streaming services on devices like the PS4 that don’t allow VPN applications and clients. It gives you access to geo-restricted material but does not provide the same protection as a VPN.

You should consider using SurfShark with your PS4 since it is a top-notch VPN service. It guarantees fast streaming and gaming speeds. Additionally, it aids in unblocking the most widely used streaming services on your console. Yet again, SurfShark offers advanced privacy and security features to gamers. Even though SurfShark is not compatible with a PS4, you can use this VPN with your console through any of the methods above.